Hiroshima and Nagasaki will never be erased

Hiroshima and Nagasaki will never be erased

The sane and beautiful tradition of the Six Nations of the Haudenosaunee Confederacy is to open every important meeting with some ‘words before all else’: a series of ‘Greetings to the Natural World.’ And they begin by greeting each other, ‘The People,’ as follows: “Today we have gathered and we see that the cycles of life continue. We have been given the duty to live in balance and harmony with each other and all living things.”

Today we gather to mark and mourn the 75th anniversary of a crime against humanity and the planet that broke the ‘cycles of life’ – the continuity of past, present, and future – like no act before or (so far) since. The atomic bombing of Hiroshima, and three days later Nagasaki, was the end of the world – instantly or agonisingly, physically and psychologically – for hundreds of thousands of people, the vast majority civilian. But in the unprecedented, irreparable, elemental extremity of its violence – the conjuring of demonic imbalance and disharmony from the atomic heart, the nuclear core, of Creation – the Mushroom Cloud seemed to many, then and now, to represent (no, to be) the beginning of the end of the world itself.

In The Testimony of Light, written after visiting Hiroshima in 1995, the American poet Carolyn Forché attempted to revisit that point-of-no-return, re-enter the “blazing maple” of the city, where “the trousered legs of the women shimmered” and “they held their arms in front of them like ghosts”: where “the coal bones of the house clinked in a kimono of smoke,” and “the baby crawled over its dead mother seeking milk.” Forché concluded:

The way back is lost, the one obsession.

The worst is over.

The worst is yet to come.

Is she right? Not if we ban the Damn Bomb, the ‘one obsession’ – or genuinely heroic Quest – of many of the hibakusha, the survivors of the Bombings. They include Setsuko Thurlow – a Canadian citizen since the 1950s, and just 13 when her hometown of Hiroshima was destroyed. She was in school at the time, 8:15 on a gorgeous morning, when she “saw a blinding bluish-white flash from the window. As I regained consciousness in the silence and darkness…I began to hear my classmates’ faint cries: ‘Mother, help me. God, help me.’ As I crawled out, the ruins were on fire. Most of my classmates in that building were burned to death alive. I saw all around me utter, unimaginable devastation. Processions of ghostly figures shuffled by. Grotesquely wounded people, they were bleeding, burnt, blackened and swollen. Parts of their bodies were missing. Flesh and skin hung from their bones. Some with their eyeballs hanging in their hands. Some with their bellies burst open, their intestines hanging out. The foul stench of burnt human flesh filled the air.”

In 2017 Setsuko Thurlow accepted the Nobel Peace Prize on behalf of the International Campaign to Abolish Nuclear Weapons (ICAN), rewarded for its leadership of efforts to achieve the new Treaty on the Prohibition of Nuclear Weapons, the ‘Ban Treaty’ Setsuko describes as “the beginning of the end of nuclear weapons.” Adopted by 122 states at the UN General Assembly in July that year, the Treaty is only opposed by the nine nuclear-armed states and their three dozen or so docile allies, including – alas – Canada. For the last four years, Setsuko has been asking to meet Prime Minister Justin Trudeau, to tell her story and persuade him that – to paraphrase President John F. Kennedy – if we don’t abolish nuclear weapons, they will abolish us.

But even if we do ‘Ban the Bomb,’ we need the courage to acknowledge that the sin and stain – the “foul stench” – of Hiroshima and Nagasaki will never be erased; that ‘the future’ can never again mean what it did. The way back is lost: but if the world’s states and peoples can work together to build a nuclear-weapon-free world, there may still be a way forward.

In a moment I will ask you to observe a minute’s silence: and to try and hear the unspeakable silence at the heart of Hiroshima that day; a “fearful silence,” Yōkō Ota recalled, “which made one feel that all people and all trees and vegetation were dead.” “The world of the dead,” historian Richard Rhodes writes “is a different place from the world of the living and it is hardly possible to visit there. That day in Hiroshima the two worlds nearly converged. Only the living can describe the dead; but where death claimed nine out of ten, or, closer to the hypocenter, ten out of ten, a living voice necessarily distorts. The silence was the only sound the dead could make. They died because they were members of a different polity and their killing did not therefore count officially as murder; their experience most accurately models the worst case of our common future.”

Rhodes, simply, asks his readers to do something very difficult: “Remember them.” Let us try, and by trying imagine a ‘common future’ of peace, balance, and harmony for each other as people and all living things…

Tags: Hiroshima Hiroshima Day PeaceQuest Cape Breton
Previous Story
Write a comment: What are your thoughts, 75 years after the atomic bombings of Hiroshima and Nagasaki?
Next Story
No Shelter from the Storm

Sign-up for the Canadian premiere of The Vow from Hiroshima... 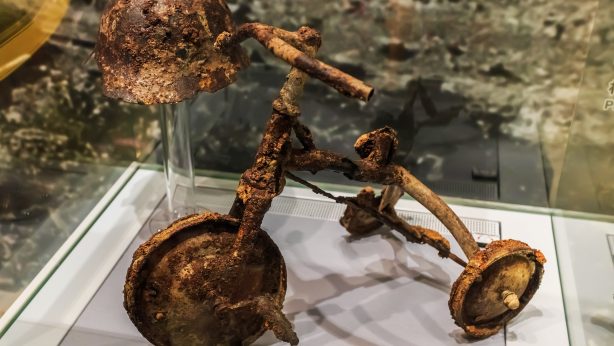 Events in Toronto, Vancouver and Ottawa (new!). Watch here for...