If Putin goes nuclear first – don’t push the button, too

If Putin goes nuclear first – don’t push the button, too

If Russian Federation President Vladimir Putin makes good on his threats to use a nuclear weapon in Ukraine, how should the West respond?

The U.S. Admiral who served as Supreme Allied Commander of NATO had this to say: “One thing we should not contemplate is responding in kind, with NATO nuclear capability. Although the Alliance has such means and recently conducted its annual exercises demonstrating this ability, avoiding further nuclear escalation must be avoided at all costs.”

He wrote in Time this week, “A few days ago, in a strange move, the Russian Minister of Defense, Sergei Shoigu, reached out to several NATO counterparts, including the U.S., United Kingdom, and France. He laid out a preposterous lie, purporting to have evidence that the Ukrainians were preparing to use a ‘dirty bomb’ soon. These ‘dirty bombs’’ are simply large explosives combined with radioactive material—they scatter the radioactivity around a large area, although the lethal effects are actually relatively small. The NATO ministers correctly pushed back strongly, including issuing a joint statement denying such a scheme existed.”

Here are his suggestions:

While most of these responses are in the diplomatic and economic realm, some of the military elements are risky. For example, enforcing a “no-fly” zone using NATO jets over Ukraine could quickly end up with Americans shooting at Russians, and Russians shooting back. Escalation would soon follow.

Experts have been warning the world is on the brink – and any miscalculation could lead to a global nuclear holocaust.

U.S. President Joe Biden has said so himself. Putin was “not joking when he talks about the use of tactical nuclear weapons or biological or chemical weapons,” Biden said this month. “We have not faced the prospect of Armageddon since Kennedy and the Cuban Missile Crisis.”

Tags: Ukraine
Previous Story
Is it a fight to the death (of everyone) in Ukraine?
Next Story
White Poppies to remember for peace this November 11 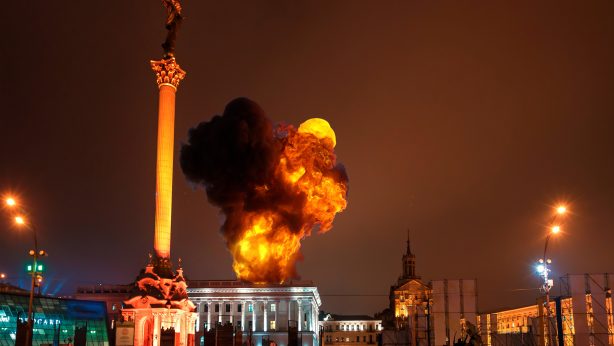 If you listen to only one thing today – this...