UN Day at 75, and Bob Rae’s challenge at the United Nations

UN Day at 75, and Bob Rae’s challenge at the United Nations

Canada’s contribution to the international institution has come under scrutiny since Canada’s failure to win a seat on the UN Security Council, and its near absence from UN peacekeeping operations.

Bob Rae has arrived on the scene

EDMONTON—When Canada lost its bid for a seat on the UN Security Council the second successive time last June, I thought a foreign policy review from top to bottom was the solution to get Canada back on track internationally. But I’ve changed my mind for two reasons: the world is in multiple crises revolving around COVID-19 that need to be acted on now, and Bob Rae has arrived on the scene.

I don’t mean to present the estimable new Canadian ambassador to the UN as a world saviour, but he has quickly established himself as a champion of the UN humanitarian agenda, which centres around reducing the grotesque economic inequalities that the pandemic has worsened.

Rae told a world audience last week that he wants “bold, imaginative, creative and adequate” solutions to the COVID-19 crisis. Richard Gowan, the International Crisis Group’s representative at the UN, calls Rae a “big beast” (definitely meant as a compliment to his political clout) and applauds Prime Minister Justin Trudeau for sending such a dedicated ambassador.

If you study Trudeau’s speech on Sept. 25 to the UN General Assembly—”we are facing a global humanitarian crisis … the system is broken … things are about to get much worse unless we change”—you can see Rae’s fingerprints all over it.

In August, just as he was taking up his ambassadorial post, Rae delivered his report to the prime minister on his findings as Canada’s special envoy on humanitarian and refugee issues. COVID-19 is a global problem, he said. “If we fail to act now, it is a certainty that a rapidly deteriorating condition facing a great many countries will become even worse, with catastrophic consequences in lives lost, hard-fought social programs deteriorating, and economies laid waste. At some point, the world will wake up to this, and then the costs of response will be even greater. This is not a guess or a prediction. It is a certainty.”

The Trudeau government was well aware of the COVID-19 gravity before Rae arrived. In May, Trudeau co-hosted, with Jamaica, a UN “High-Level Meeting on Financing for Development in the Era of COVID-19 and Beyond” to advance concrete solutions to the development emergency, such as boosting liquidity and debt relief. At the time, Canada committed $159.5million, plus airlifting supplies to support international efforts to fight the pandemic.

At a further meeting of this process on Sept. 29, Trudeau pledged an additional $400-million. Rae had meanwhile briefed the cabinet and presumably repeated to ministers what he said in his report: Canada’s response cannot be limited to amounts budgeted well before the pandemic. “We must do substantially more,” he wrote. The “more” also now includes $220-million to purchase COVID-19 vaccines for low-and middle-income countries.

With Trudeau and Rae both leading in sync, Canada is showing the world that it is rebounding from its Security Council defeat and able to take on a big UN task—as Secretary-General Antonio Guterres described it, “integrating the principles of sustainable development and social and economic inclusion into financial decision-making.”

Rae is promoting a stronger Canadian presence in the international aid field, and now that Canada has provided close to a billion dollars in COVID-19 relief, Trudeau’s credentials in pushing other wealthy countries to do more are greatly strengthened. The ambassador wants more than money. The crisis, he says, “is also about a clarity of vision and a willingness to put our shoulders to the wheel.”

In his report to the prime minister, Rae reached into the depths of the global turmoil: “At a time when many are claiming that the idea of a rules-based international order and collective action is a relic of history, demonstrating the ability of the international community to collaborate to resolve one of the greatest challenges of our time can serve to resuscitate the very notion of collective action over unilateralism.”

Perhaps Rae feels he has pushed the Ottawa system far enough—for the moment. But at the UN, whose thinking processes Rae is now immersed in, the analysis goes deeper. The UN Department of Disarmament Affairs points out that a 10 percent cut in world military expenditures of $1.9 trillion annually would make $190-billion available for the UN’s Sustainable Development Goals program. “Reducing military spending and diverting the saved resources towards socioeconomic development is one of the first and most important steps in addressing human needs,” the department says.

Canada’s current defence budget is $22-billion and is programmed to rise to $32-billion by 2027. The government’s plan to spend $553-billion on defence in the next 20 years, much of this to buy 88 fighter jets and 15 warships, dwarfs our contribution to sustainable development. Is high military spending in the new age of COVID-19 really what Canadians want?

The virus has taught us that human security does not come from weaponry. Could Canada do with a few less fighter jets and move more money into human security? When asked this very question, Canada’s Defence Minister, Harjit Sajjan, said Canada’s planned defence spending is “secure,” adding, “We’re not just going to make a knee-jerk decision on where we’re going.” The powerful Canadian Association of Defence and Security Industries, Canada’s own military-industrial complex, will doubtless back him up.

Since Deputy Prime Minister Chrystia Freeland wants “hard power” as a basis of Canada’s foreign policy, Bob Rae will not have an easy time persuading cabinet to concentrate less on militarism and more on development even if Trudeau is willing to move in this direction. Maybe we’ll find out if Rae really is a “big beast.”

Douglas Roche is a former senator and former Canadian Ambassador for Disarmament. 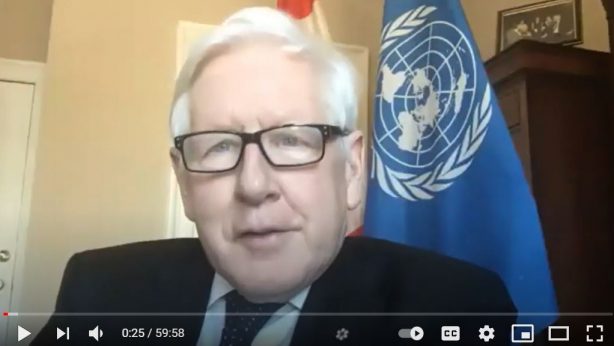 How is Canada defending people from human rights abuses abroad 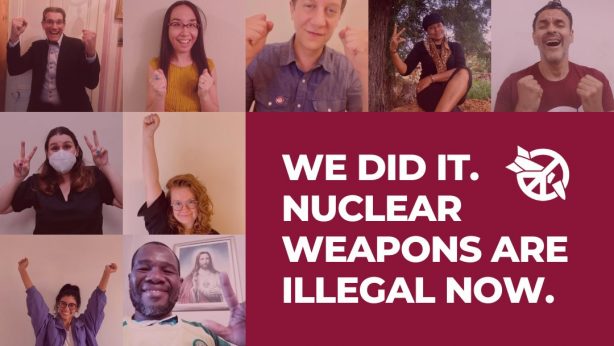 Honduras was the 50th country to join the UN Nuclear...