We received this column from our friend Peter Langille this week. In it, Peter argues that war between great powers is not inevitable, although the current trajectory makes it far more likely. So, new thinking and a new approach are now crucial. It was published by the Hill Times on July 11, 2022.

Time to move away from insular interests for security solutions

Whatever happened to security, “the state of being free from danger or threat”?

It’s easy to see that global challenges require global solutions. Yet global governance, like global security, remains largely undeveloped. The United Nations is the closest representation to date, but it also depends on the multilateral co-operation of 193 diverse member states, with a wide array of governments who often have competitive and conflicting interests.

Maintaining “international peace and security” is the primary responsibility of the UN Security Council. Its five permanent members (China, France, Russia, the United Kingdom, and the United States) remain divided and unwilling to support or fund a more effective UN. Despite its limits, the UN works surprisingly well on numerous crucial issues, although it’s still not equipped for its first priority: “saving succeeding generations.”

Sovereign states are assumed to be the principal actors in security, with a monopoly over coercive capacity on their territory. In a competitive system, with no higher authority, countries try to counter security challenges by arming up. Yet when competitors notice and respond similarly, it often prompts an arms race. This action-reaction response tends to spiral out of control into a security dilemma of increased threat and risk.

Even in the nuclear era, an old Roman dictum—si vis pacem, parabellum, “if you want peace, prepare for war”—continues to guide official thinking and policy. As a result, “national security” focuses primarily on preparation for war, with systems largely designed to cause the insecurity of other people and/or their death and destruction.

And, how well has that worked? Wars over the past 77 years have been largely unwinnable, even for the most powerful, despite their massive efforts and expense.

To play its part, Canada announced a 70 per cent increase in military spending, with major acquisition programs for 88 F-35 fighter-bombers and 15 new surface combatant frigates, which combine to an overall cost of approximately $500-billion. Although neither are appropriate for monitoring, patrol, and control of Canadian airspace and waters, or any role in UN peace operations, both are advanced war-fighting systems primarily designed to penetrate the air and sea defence of a great power.

Prevention of war was once a priority of successive Canadian governments, but not now. Here, the enthusiasm for militarism and more preparation for war reflects the quiet official shift away from an influential role in the UN to a subordinate role in the Western military alliance, NATO. As official Ottawa is increasingly devoid of independent security analysis, it relies on Washington, D.C., and NATO to set its “security” agenda, irrespective of serious costs and consequences.

Governments also continue to support a system of mutually-assured destruction and a nuclear “balance of terror” to maintain deterrence. If that threat system fails—and the probabilities of failure increase over time—the survivors may have a few dark years of a nuclear winter. Well, so much for being free from danger or threat.

In 1961, then-U.S. president Dwight Eisenhower’s farewell address warned of another security problem: “In the councils of government, we must guard against the acquisition of unwarranted influence, whether sought or unsought, by the military-industrial complex. The potential for the disastrous rise of misplaced power exists and will persist.”

But a president’s speech wasn’t enough to stem the appeal. The military-industrial complex expanded in the Cold War, with globalization, the war on terror and huge annual investment. Now, it sets the security agenda by harmonizing interests to ensure access, influence and overwhelming political, economic and military power.

The wider consequences are serious yet seldom considered. For one, the cost of preparing for more war at US$2-trillion annually is now dwarfed by the damage caused, with the Global Peace Index reporting the economic impact of violence at US$14.96-trillion annually, even before the Ukraine war. That’s a yearly burden of nearly US$2,000 on everyone, everywhere.

Environmental security also suffers. Aside from wasting resources, violent conflicts shift political priorities and spending back to “business as usual.”

The latest security confrontation is rooted in geopolitics. It’s driven by interests, profits, and fears, yet rationalized as defending values like freedom and democracy from an imminent threat.

The United States plans to remain dominant and to continue leading the unipolar rules-based system established after the Second World War. Competitive rising powers, especially China and Russia, are to be deterred (or defeated) from establishing regional spheres of influence.

Officials in the Biden administration already informed UN staff that they’re not interested in a UN-centred order. Instead, the NATO military alliance—effectively the multilateral extension of the military-industrial complex—is the West’s new preference.

China and Russia also call for a multipolar system, with rules grounded in international law and the UN Charter. Both interpret a multipolar world as one in which major powers exercise privileged rights within their own sphere of interests. Neither appreciate a foreign military presence near their borders. When challenged, they’ve made it clear they will respond aggressively. Both also claim to be developing democracy and improving human rights, albeit on their terms as independent sovereign states.

War between great powers is not inevitable, although the current trajectory makes it far more likely. The ongoing proxy war with Russia has increased the wider enthusiasm and preparations for more.

Security really isn’t all that complex. One doesn’t need more than common sense to see problems and contradictions in the prevailing approaches and systems of security. Combined, these encouraged what’s now a heavily militarized, dysfunctional war-prone system.

Earlier attempts to moderate this system with concepts such as “collective,” “co-operative,” “common,” and “human” security helped, but were soon forgotten as government priorities and funding remain focused on national security.

It may be discomforting, but the future, if there is to be one, will depend on far deeper co-operation.

So, new thinking and a new approach are now crucial. There is a clear need for an independent, inclusive review of global security for people and the planet. And, in elevating the focus to global security, there is a better chance to restore the golden rule: “do unto others as you would have them do unto you.”

It may be discomforting, but the future, if there is to be one, will depend on far deeper co-operation.

Security can no longer be acquired at the expense of others or through more weapons for more war. Our position in the nuclear era is similar to that of two people in a canoe; if one tips, both tip. With mutual vulnerability, security will have to be shared. And, what’s done to advance security cannot continue to be based on short-term political, economic, and military expediency, or on profits for a few. To be effective, security will have to be enduring and attuned to wider needs and long-term consequences.

(Cover: NEW YORK, USA – Sep 28, 2015: President of the People’s Republic of China Xi Jinping speaks at the opening of the 70th session of the General Assembly of the United Nations Organization in New York. Via Shutterstock) 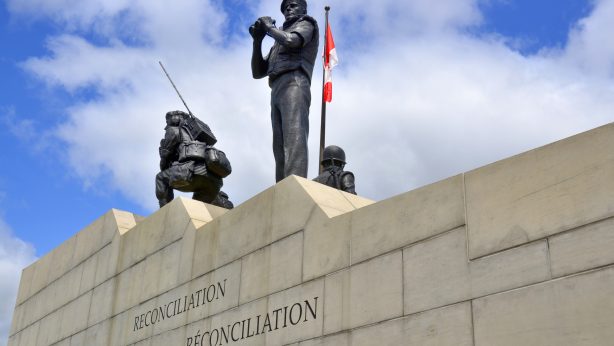 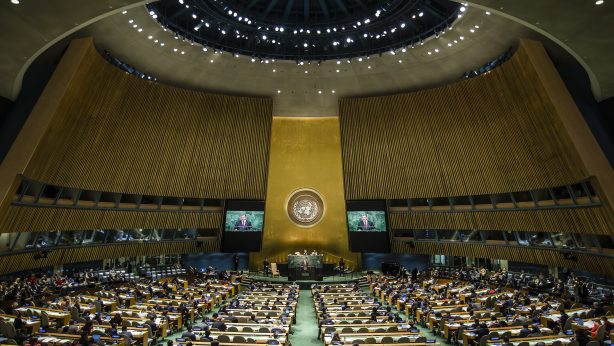 In 2022, humanity faces the existential threats of nuclear war,...