It’s been a harrowing week. Russian Federation President Vladimir Putin has made more nuclear threats. NATO leaders, including those in Canada, pay no mind to the very real potential of a nuclear catastrophe.

On a more positive note, more countries signed or ratified the UN Nuclear Ban Treaty this week, officially known as the Treaty on the Prohibition of Nuclear Weapons (TPNW). No doubt these countries are rushing into the arms of pro-disarmament movements to signal their dismay at dangerous events unfolding between the superpowers.

You may recall that in Canada, Prime Minister Justin Trudeau blew-off the UN Nuclear Ban Treaty as “sort of useless,” and he has refused to meet with the Canadian atomic-bomb survivor, Setsuko Thurlow, who accepted the Nobel Peace Prize in 2017.

PeaceQuest Cape Breton essayist Sean Howard  continues his brilliant efforts to awaken readers to the global nuclear threat. This week, he reminds us of the famous George Orwell, author of Animal Farm and 1984.

Writing in the Cape Breton Spectator, Howard says, “As George Orwell foresaw as early as October 1945, the fundamental political paradox of the atomic age is that while the Bomb rendered ‘national security’ anachronistic, an explosively obvious contradiction in terms, it imbued its possessors with unprecedented ‘superpowers’ not just to destroy but dominate.”

“We have before us,” Orwell wrote, “the prospect of two or three monstrous superstates, each possessed of a weapon by which millions of people can be wiped out in a few seconds, dividing the world between them.” This means either, he argued, “bigger and bloodier wars, and perhaps an actual end to the machine civilization,” or, “and really this is the likeliest development,” a “cold war” in which “the surviving great nations make a tacit agreement never to use the atomic bomb against one another.” “Suppose,” he pondered:

…they only use it, or the threat of it, against people who are unable to retaliate? In that case we are back where we were before, the only difference being that power is concentrated in still fewer hands and that the outlook for subject peoples and oppressed classes is still more hopeless.

“Had the atomic bomb,” Orwell concluded, “turned out to be something as cheap and easily manufactured as a bicycle or alarm clock, it might well have plunged us back into barbarism, but it might, on the other hand, have meant the end of national sovereignty and of the highly-centralized police state.”

But if “it is a rare and costly object as difficult to produce as a battleship, it is likelier to put an end to large-scale wars at the cost of prolonging indefinitely a ‘peace that is no peace’”—an allusion, I presume, to the famous verdict passed by a British army officer, Archibald Wavell, on the 1919 Versailles treaties ‘ending’ World War One:

After “the war to end war” they seem to have been pretty successful at making a “Peace to end Peace.”

Tags: Nuclear Ban Treaty
Previous Story
Video: Watch Elizabeth II as Queen of the Nuclear Age
Next Story
The war in Ukraine is entering a new and deadly phase

Webinar: Canada and the Abolition of Nuclear Weapons 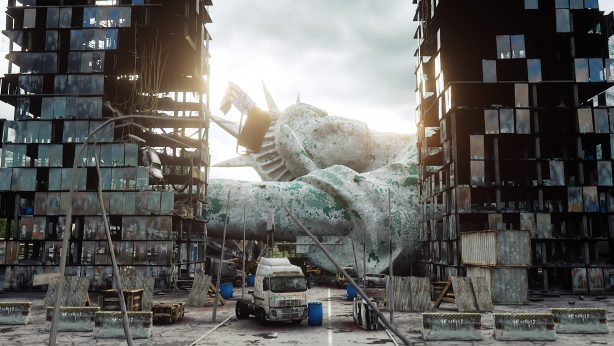 Is it a wake-up call? Or a sleeping pill